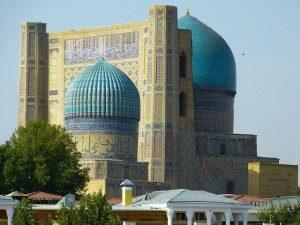 “Visions of Uzbekistan” is an exhibition sponsored in partnership with the Embassy of Uzbekistan which will run from January 8, 2015 – February 7, 2015.

Uzbekistan is located at the heart of Central Asia, neighboring world civilizations such as China, Persia, and India, and connecting to the Turkic world and to Europe via Russia. The territory  of  modern  Uzbekistan  hosted  the  prestigious  ancient  civilizations of  Bactria, Sogdiana, Parthia and Khorezm and was traversed by caravans carrying precious silk, gold, porcelain and spices along the Great Silk Road. These ancient civilizations invented sophisticated irrigation techniques, inspired the canons of Islamic culture in the 9th-10th centuries, and were at the center of a vast empire created by Tamerlane in the 15th century. They made major contributions to world science and literature through geniuses such as Avicenna, Alisher Navoi, Ulugbek, Al-Khorezmi, al-Beruni, Al-Farghoni, Imam Al-Bukhary, and others. Present-day Uzbekistan benefits from this past, offering the most accomplished architectural heritage within Central Asia. Since the country’s independence in 1991, Uzbek society aims to combine modernity with the rediscovery of its past, and to integrate its historical legacy into a larger, globalized framework. The photo exhibition “Visions of Uzbekistan” reflects both the ancient culture and the modern life of the Uzbek people and introduces cultural aspects to the narrative about Uzbekistan in the United States.