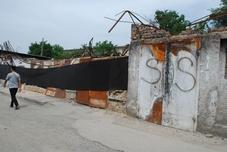 with Sarah Kendzior, Al Jazeera English and Noah Tucker, Courage Services and Registan.net
The speakers will examine the transnational effort by ethnic Uzbeks to document the June 2010 violence and mobilize international support, first for intervention to stop the conflict and then in an effort to defend minority rights and preserve evidence of alleged injustices suffered by the community in Kyrgyzstan. These efforts were made possible primarily by new forms of digitalcommunication and social media. Instant, global communication made the plight of Uzbeks in Southern Kyrgyzstan an issue of broad resonance for the wider ethnic community in a way that similar outbreaks of civil or state violence had never been in the past and facilitated the re-imagining of other late- and post-Soviet historical conflicts to fit new ethnic narratives. Combining analysis of digital media, art, and documentation with recent ethnographic fieldwork in Southern Kyrgyzstan,they will address questions about how permanent “digital memory” of violence shapes the process of conflict resolution and re-adapting to post-conflict everyday life, and how narratives produced by the global community-most of whom did not experience the conflict itself-shape, and sometimes conflict with, collective memory and understanding of the conflict for those who actually experienced it.
Read more
Categories: Cultures and Societies Uzbekistan Tags: conflict digital ethnic Islam Kyrgyzstan Uzbekistan
June 2013 Jun 2013
Subscribe to filtered calendar