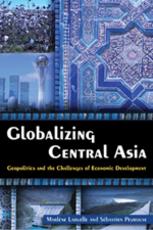 Marlene Laruelle, Research Professor of International Affairs, GWU
Sebastien Peyrouse, Research Professor of International Affairs, GWU
and
Discussant: Johannes Linn
Former World Bank Vice President for Europe and Central Asia
Central Asia, as it emerges from a political and economic system that was closed until the end of the twentieth century, is a textbook case for globalization. The book Globalizing Central Asia: Geopolitics and Challenges of Economic Development traces the region’s entry into the highly competitive global arena, not only through state interaction with numerous external players, but also in geo-economic terms. The region’s natural resources compel the attention of rivalrous great powers and ambitious internal factions. Russia and China dominate the horizon, with other global players close behind.The local regimes are caught between the need for international collaborations to valorize their resources and the need to maintain control over them in the interest of state sovereignty. Local patterns of development thus become a key driver of external actors’ involvement and shape the mechanisms by which the Central Asian states are forging a place for themselves in the globalized world.
Read more
Categories: Economic Forum Tags: economic geopolitics
April 2013 Apr 2013
Subscribe to filtered calendar