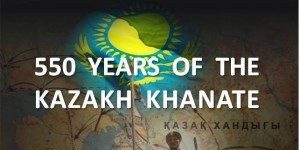 [vc_row][vc_column][vc_column_text]with Mr. Andrey Khazbulatov, Director General of the Kazakh Science and Research Institute of Culture under the Ministry of Culture and Sports

The documentary, based on a historical opus “Within the Stream of History,” authored by President Nursultan Nazarbayev, is a riveting visual journey through 550 years of history of the Kazakh people.

The epic takes the audiences to the distant times of the unification of Turkic tribes into a Kazakh Khanate in 1465 under the leadership of Khans Zhanibek and Geerey; follows the Great Silk Road, connecting East Asia and the Mediterranean; chronicles the Mongolian conquests of the Kazakh tribes and geopolitical restructuring of the world; and recounts the battle over the inheritance of Genghis Khan.

One of the historical bases of the film is the ancient Book of Kypchaks (“Codex Cumanicus”) archived at the Library of St.Marc in Venice since 1362 – a unique record that affords a privileged glance into history and shatters ingrained stereotypes of barbaric culture of nomads.

The film narrates the history of a new type of centralized state, and new civilization, which gave a colossal impetus to the development of world trade, economy, and culture. Stunning images of authentic Kazakh dress and lifestyle, as well as breathtaking scenery of the Kazakh steppes, mountains, and valleys throughout the four seasons of the year will leave a lasting impression on the imagination of the audience.

Film’s director, Bakhyt Kairbekov, is a renowned filmmaker, author, and poet, with over 100 documentaries and 10 volumes of poems to his credit.