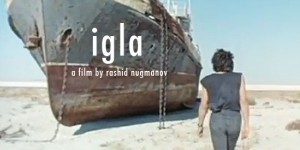 In the bleak filmscape of glasnost, The Needle stood out as a black sheep of a movie. The most playful and offbeat of the Soviet films of the period, it contrasted sharply to the mainstream, which was overwhelmed with revisionism of the Stalinist past and nihilistic social criticism.

A young man named Moro (played by Viktor Tsoi, the late rock ‘n’ roll legend from the St. Petersburg band “Kino”) returns to his Asiatic hometown only to find his exgirlfriend, Dina (Marina Smirnova), becoming a drug addict and himself becoming involved in the bizarre life of the city’s underworld. In an attempt to save Dina, Moro takes her away to the Aral Sea, turned into a barren desert by the time they arrive. There Dina seems cured, but back in town everything starts anew. Almost desperate, Moro decides to fight the drug dealers, led by a hospital doctor (played by another rock ‘n’ roll star, eccentric leader of the “Sound of Mu” band and the future star of Taxi Blues , Pyotr Mamonov), when one of them stabs him in a deserted park. 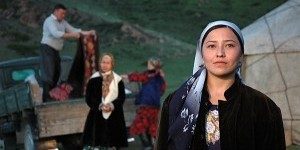 Asema gets engaged to Murat and the two go to Murat’s hometown, where the traditional Kyrgyzstani culture remains. One day, Asema learns of a plan to kidnap his bride for a shepherd called Sagyn. The film comically depicts the “marriage by abduction” that continues to happen in the countryside of Kyrgyzstan. The film also poses questions about marriage and love.[/vc_column_text][/vc_column][/vc_row] 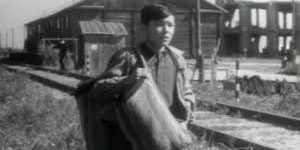 An old man decides to look for his dead son and bring his corpse back to bury him in the land of his ancestors; his son, a Kazak soldier, was killed in action somewhere in Russia. Along with his grand-son, they go across the country and discover the harsh reality of the war.[/vc_column_text][/vc_column][/vc_row] 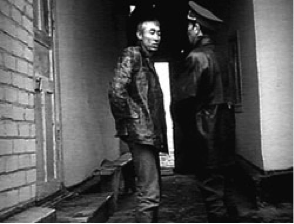 Aksuat is the name of a village in Kazakhstan, where Kanat takes his pregnant wife Zhanna to visit his brother, Aman. Just after the baby is born, Kanat is thrown into jail after a fight with a policeman, so Aman has to take care of Zhanna and gets the gossip and disapprovals of the village. Aman loses his status, but learns a thing or two about life.
– Written by Jos Fonteijn <jos.fonteijn@planet.nl>[/vc_column_text][/vc_column][/vc_row]

Aktan Abdykalykov made his directorial debut with this semi-autobiographical Kirghizian-French drama set in a rural Kirghizian village where young Adyr plays in the brick mudpits, takes an interest in a girl, and attends outdoor movie showings. However, Adyr’s pals reject him when it’s learned that he’s adopted, and more dark clouds hover over Adyr after a death in the family. (Rotten Tomatoes~ Bhob Stewart, Rovi)