Azerbaijan has long positioned itself as reluctant to see the revival of Russian influence in Eurasia.

The role of Russia as an emigration pole for the whole post-Soviet region creates a fertile background for a positive reassessment of Moscow’s offer to boost regional integration.

The Kremlin has to face a real and deep distrust about its capacity to efficiently implement its promises.

Dr. Aliyev defended his Ph.D. in 2009. His monograph, Eurasianism: A Geopolitical Discourse (2010), is the first Azerbaijani book on the topic. During the course of his research, Dr. Aliyev cooperated with the Azer-baijan Diplomatic Academy, the Institute of Strategic Studies of the Caucasus, and the Central European University. He is one of the authors at www.kultura.az, in the framework of which he specializes in covering issues of philosophy, politics, art, and musicology. 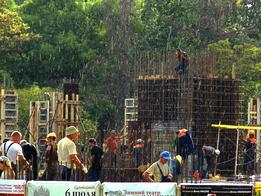 Together on the Move: Tajik Migrants in Olympic Sochi