Skip to content
Home
/
From our Partners
/
Partner Publications
/
The Paradox of Uzbek Terror. Peace at Home, Violence Abroad

This week’s terrorist attack in Manhattan, carried out by a citizen of Uzbekistan, Sayfullo Saipov, followed several assaults and bombings also involving people from that country: the New Year’s shooting in Istanbul was executed by Abdulkadir Masharipov, an Uzbek citizen; Rakhmat Akilov, an Uzbek whose application for asylum was rejected, was responsible for the Stockholm attack in April; and the bombing in the St. Petersburg metro a few days earlier was led by Akbarzhon Jalilov, an ethnic Uzbek born in Kyrgyzstan who held Russian citizenship.

In light of the strikes, Western media outlets have grappled with the relationship between Uzbekistan and religious terrorism, discussing for instance the problem of “Central Asian Militancy” and “How Uzbekistan Became A Hotbed For Violent Extremism And Radicalism.” But such analysis is too simplistic.

Since its independence in 1991, Uzbekistan has been one of the most repressive countries in Central Asia in terms of religion. Several thousand people have been imprisoned—and some tortured—for alleged Islamist convictions. Friday prayers are written by the state, and imams are encouraged to repeat them verbatim, without adding personal commentary. Religious education is kept to a minimum, and forbidden for minors. Imported religious literature is banned. Those who study Islamic theology abroad have trouble finding jobs when they return home.

It might seem logical that such repression would lead to an increase in Islamist violence at home: for years, many NGOs and self-proclaimed security experts claimed that radicalization was on its way. But, so far, there has been no such uptick. The last terrorist attacks date back to the first half of the 2000s. The security services have been well able to control and dismantle underground politicized religious groups. Even when the country hosted the NATO-funded Northern Distribution Network (2009–2014), which transported equipment for NATO troops into and out of Afghanistan, no terrorist attacks were reported along the railway—in stark contrast to the steady attacks on NATO lines in Pakistan. 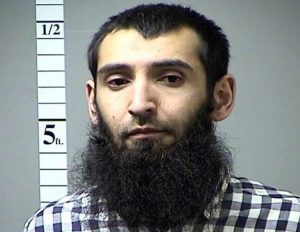 Rather, indigenous Islamist movements, such as the infamous Islamic Movement of Uzbekistan (IMO), having to flee repression, exited the country. In the 1990s, several hundred radical Islamist Uzbeks joined the Taliban and al Qaeda in Afghanistan. They then retreated to Waziristan in Pakistan before the Islamic State (ISIS) came along and deeply divided them. Some wanted to continue the fight against Western presence in Afghanistan, others wanted to move the battle to the Levant and profit off the media attention.

The IMO disintegrated into several competing entities, some of which stayed in the Af-Pak region while the majority moved to Syria. Some fighters joined ISIS, others the al-Nursa front. Research from USAID shows that in ISIS’ heyday in 2014–15, Uzbek fighters in Syria and Iraq amounted to 1,000-2,000 individuals (out of approximatively 10,0000 foreign fighters, maybe more). Many were killed, some went back to Afghanistan and Pakistan, some are moving to the next battlefield of Libya, some will try to emigrate to Russia, Turkey, or the West. Yet unlike other countries that fear the return home of radical fighters, Uzbekistan will see almost no reentries. These are genuinely internationalized jihadists who have lost contact with their home country and do not care about its domestic evolution.

Aside from the group of Uzbek militants who left the country in the 1990s, Uzbekistan did not produce or export terrorists. But the country does export labor migrants.

There are between two and three million Uzbek migrant laborers in Russia. Some of them lost contact with their home communities and, facing difficulties in a foreign culture, became radicalized online. The same goes for some of the Uzbeks now living in exile in Turkey—numbering probably in the tens of thousands—and in Western Europe and the United States—about 300,000 in the United States alone. As early as the second half of the 2000s, several Uzbeks were arrested in Germany and the United States for plotting terrorist acts. Although that group was linked or inspired by the IMO or its heirs, such as the Islamic Jihad, the new 2017 terrorists are not part of any deep network, but were inspired by other attacks carried out in European capitals.

Even as the so-called Uzbek terrorist problem spreads further abroad, Uzbekistan itself remains free of terrorist violence. At home, Islamic identity is on the rise, peacefully. Younger generations of Uzbeks take far greater pride in their religious identity: they observe Ramadan and give to charity more regularly than previous generations. Some young people call for the right to display visible markers of Islamic piety in public spaces and many advocate for Islam to be integrated into school curricula. The debate around the need for women to veil (or not) is vibrant, and many businessmen legitimize their prosperity by investing in new mosques or madrassas.

Religious repression is possibly on the wane. In the last two years of longtime President Islam Karimov’s rule, there was timid but perceptible change in the government’s attitude toward religion. Anxious about ISIS’ media outreach and aware of the need to appease more religious younger Uzbeks, the authorities launched several new websites led by renowned theologians and preachers to promote a “correct”—that is, nonpolitical—Islam. In the wake of Karimov’s death in September 2016 and the rise to power of Shavkat Mirziyoyev, slow reforms are now underway. One of these is to soften the country’s strenuously secular tradition to better accommodate Islam and reintegrate it into political discourse.

Neither religious oppression nor hints at freedom have had much effect on radicalization in Uzbekistan, although repression, combined with the lack of economic prospects, certainly motivates people to move abroad in hopes of a better life. It is abroad, when some individuals lose support of their communities, families, and networks, that they can find themselves vulnerable to radicalization.

Uzbek terrorism in Europe and the United States is therefore not a direct product of Uzbekistan’s policies but a result of difficult integration processes in host countries. If policymakers want to make a difference, they need to look for domestic factors that can push immigrants to be radicalized here in the United States, and not see the country as a victim of another nation’s alleged “exported” violence.